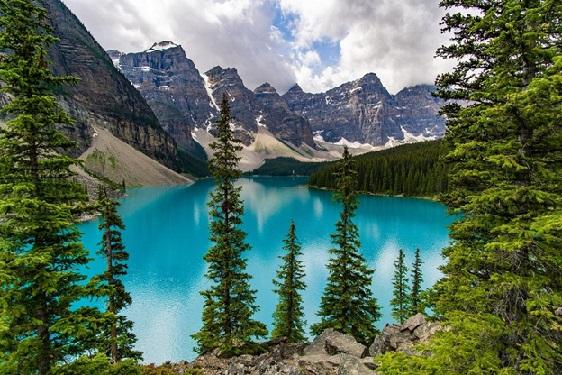 Canada is a paradise for nature lovers. It is famous for its unspoiled nature, numerous national and provincial parks, and wild animals that can be encountered at almost every turn. When planning a trip to Canada, just in case, you should familiarize yourself with the procedure in case of close contact with wild animals. Do not worry in advance. After all, Canada is one of the safest countries in the world, and one of the of the main goals of a trip to the Land of the Maple Leaf is precisely to observe wild animals in their natural habitat.

There are two very well-known national parks in the province of Alberta. These are Banff National Park and Jasper National Park. These two natural wonders are connected by one of the most scenic roads in Canada – the Icefield Parkway. This is a 230-kilometer scenic route that takes you through the Rocky Mountains. If you plan to travel this route by car, consider the possibility of encountering wild animals along the way. Use caution and have your camera ready, it will definitely come in handy. During the winter period, don’t be alarmed either. Canada has a well-organized road system, and the routes (especially the busier ones) are perfectly groomed even in winter. In Canada, the concept of “winter surprised the road engineers” does not apply.

In Banff Park, the must see point is the famous turquoise Lake Louise. However, in the high season, one must expect to meet a lot of tourists there. If you want to avoid this, an interesting alternative would be to visit the equally spectacular Moraine Lake. In Jasper Park, on the other hand, we recommend, for example, a cruise on Lake Maligne to Spirit Island, or Spirit Island. During such a trip, you will learn about the legends of the island and the lake, and you will be able to admire up close the beautiful Maligne Lake, which is fed by glacial waters, giving it an emerald and turquoise color.

200 km outside Vancouver, in the province of British Columbia, is Joffre Lakes Provincial Park. It is not a national park, but a provincial park, but it is equally beautiful and worth a visit. Among other things, it features three beautiful turquoise lakes. The first is Lower Lake, which can be reached in a maximum of 10 minutes from the entrance. The second is Middle Lake, at which there is a famous log submerged in the water – a must-see for the most beautiful photos. The third lake (Upper Lake) is located at the highest and has a very big advantage – from here you can see the glacier’s tongue very well.

The second park located in British Columbia is Yoho National Park. In it you will find the largest Emerald Lake in the entire park, which is an intensely emerald-colored lake that is simply stunning in its beauty. There is also a walking trail around the lake, from which you can admire the emerald lake from all sides. In Yoho Park we will also encounter many species of animals. An elk, a lynx or even an American black bear may stand in our way. Yoho is located in the Rocky Mountains, and its name “yoho” in the Native American language means more or less “yoho”. Hardly surprising, since the sights we will experience in Yoho National Park will only make us say “whoa…”. 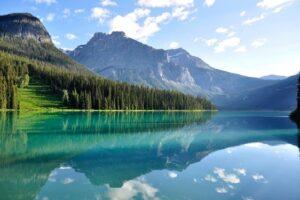 When going to the province of Quebec, we recommend visiting Jacques-Cartier National Park, which is located less than 70 km from Quebec City. In addition to trekking and breathtaking views, you can play golf there surrounded by beautiful nature, go for a bike ride, and go skiing in the winter. You also don’t have to make extra miles driving back and forth if you want to explore the park for more than 1 day (and it’s worth it!). How about a modern, wonderfully glazed and eco-friendly villa with a terrace right in the center of this park? Sounds like a dream? Nothing simpler – contact us, because that’s what we’re here for, to make travel dreams come true. 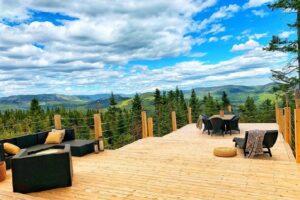 In the province of Ontario, on the other hand, Algonquin Provincial Park is worth a look. Its very big advantage is its proximity to Toronto and Ottawa, which makes it perfect for a day trip while staying in either of those cities. It is the oldest provincial park in Ontario and is named after the Algonquin tribe, one of America’s first Nations. Algonquin Park has 2,400 lakes and 1,200 km of rivers and streams. As in the other parks, opportunities to spend time are plentiful. From horseback riding, kayaking and rafting to wildlife watching.

Canada, of course, has many more beautiful parks, both national and provincial. Each of them is different, but equally worth visiting and seeing for yourself which one is your favorite.

And while you’re actively relaxing and visiting Canada’s parks, why not be tempted to connect Canada with the neighboring United States? A flight from Toronto to New York takes just 1.5 hours!

HOW TO BEHAVE WHEN ENCOUNTERING WILD ANIMALS IN CANADA?

The following is an “instruction manual” on how to behave in the event of a close encounter with wild animals, so that you don’t have to worry about it, and are safe and prepared if necessary.

Keep these rules in mind when going on the trail:

– while hiking, talk to your companion or sing so that the animals know that someone is next to you and are not surprised by your presence

– thoroughly clean up trash after yourself

– remain vigilant, look around and listen

– as a preventive measure, you can get the so-called bear spray, which will help a lot in case of an unpleasant encounter

While trekking in Canada’s parks, it may happen that you encounter a coyote, moose or bear. It is good to know in advance how to act in case of an encounter with such animals. The most important thing, however, is not to panic, stay calm and follow the instructions.

MEETING A COYOTE IN CANADA

If you meet a coyote on the trail, it is most likely that he will quickly run away from you. However, coyotes like and other wild animals are increasingly losing their instincts and associating humans with easy access to food. If you encounter a coyote, first of all, don’t run away! Coyotes are capable of accelerating up to 65 kilometers per hour, also you have no chance to escape. Do not turn your back on the animal, keep an eye on it at all times, do not throw food to it, start shouting and raise your hands to scare it away. If there is an attack, defend yourself in every possible way: throw branches, stones, anything you can find at hand, shout and call for help. And most importantly – do not pretend to be dead.

MEETING A MOOSE IN CANADA

Moose at first seem harmless to us, even calm and friendly. However, they can behave aggressively toward humans, especially if we meet a female with cubs.

If you meet a moose on the trail, make sure there is an obstacle separating you, perhaps a fallen log, large stone or tree. If a moose stands in your path, do not approach it closer than 30 meters, calmly wait until it leaves or take a different route and turn back from the trail. You may also notice from the moose’s behavior that it is behaving aggressively. It will give warning signals, you will see, for example, the hair on its neck put up and its ears laid back. The moose may also characteristically smack and lick itself, as well as delinquent from foot to foot and bob its head. If an irritated moose proceeds to attack, hide behind an obstacle and try to scare it away. In extreme cases, if a moose knocks a person to the ground, curl up into a ball and cover the head and neck.

Bears are omnivorous, but mostly feed on plants. In spring and late autumn when food is scarce in the forests, they can become dangerous to humans. They then become hungry and irritable and descend into the lower mountains to search for food. Bears also have an excellent sense of smell and are very curious animals, so different smells can attract them to us.

If you meet a bear on your path, remember not to make sudden movements, not to run away, not to look directly at the bear, not to climb trees and not to throw food in its direction. You should back away slowly, without turning your back to the animal to keep it in sight at all times. Bears often pose for an attack because they want to know their opponent’s intentions. If it is not aggressive, they are likely to leave it alone. On the other hand, if the bear continues to move toward you, prepare bear spray, start shouting, and put your hands up to appear larger. 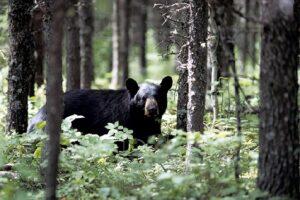 CANADA WILD ANIMALS ON THE ROAD

If you will be traveling in Canada by car you must expect that you are likely to encounter wild animals on your way. Therefore, when traveling in Canada outside of major urban areas, you should exercise caution, especially at dawn, dusk or at night, when visibility is limited. It is best to avoid traveling at these times. Of course, don’t overdo it or panic, just approach it sensibly. Make sure your car is in good working order and has good long lights, obey speed limits and look carefully around the road. If it will be necessary to drive at night, in light traffic and on little-traveled roads, Canadians recommend driving in the middle of the road, and on 3-lane roads drive in the middle lane. This way, if a wild animal jumps out of our way, we will have more room to maneuver and more time to react.

Canada is an amazing and beautiful country that is really worth visiting. When going to the parks of Canada, it is important to remember that we are the guests there, and the animals are at home. It is enough to follow a few simple rules, and our trip will be an unforgettable experience after which we will certainly want more.